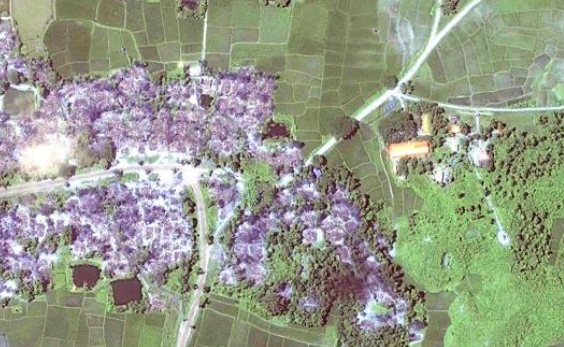 A year ago, one of the leading international news networks broadcast a story entitled Fighting Slavery From Space. This unique show was part of the 101 East program being run by the Al Jazeera English news network, based in Doha, Qatar.

This wasn’t just any news story or documentary: it adopted a unique storytelling approach which used 21st century space technology to examine the age-old problem of slavery. It also highlighted how an earth observation team from the University of Nottingham in the United Kingdom had given technical support to identify places of modern slavery using satellite data and machine learning.

This unique case study brought space technology and socio-economic problem-solving methodology together. Al Jazeera was bold enough to pick this up. It marked the beginning of what I call “Journalism from [the] Sky,” and the beginning of a new and unique journey in investigative journalism at scale.

Earth observation data for investigations draws its roots from the defense and security domain. It may be new to journalism but not to the world of justice. The earliest example of this was when it was used by the International Criminal Tribunal for former Yugoslavia in the Srebrenica case [to investigate the genocide that took place during the Bosnian war]. Recently, the office of the United Nations High Commissioner for Refugees has been using satellite data to track the activities of Myanmar’s army in the country’s Rakhine state.

In 2018, Human Rights Watch came out with a simple but very powerful and scathing report on the Burmese government and the demolition of a large number of Rohingya villages. This report not only used satellite data as evidence but also brought forward a new way of conducting investigative journalism at scale from space.

Journalism from the sky also got huge exposure in India during two recent incidents. One of them was the Balakot strike [in which Indian Air Force fighter jets crossed the line of control to strike an alleged terrorist camp in Pakistan-controlled Kashmir] and the other related to a border conflict [following Chinese construction in a disputed area, see the image below]. Various media outlets created theories and prophecies based on interpretation of the satellite images supplied by Planet (formerly Planet Labs) and Maxar.

Looking back 10 years, this kind of [coverage] wouldn’t have been possible. However, the democratization of satellite technology and the entry of private companies into the field of space means it’s now possible to have access to high spatio-temporal data at a very minimal cost, leading to interesting investigative stories.

Organizations like Human Rights Watch, International Crisis Group, NGOs, and many others are able to acquire, interpret, investigate, and document the unreported and undocumented facts which would have taken huge efforts previously.

It’s not just the data and technology but the release of this information to journalists that has played a crucial role in the adaptation of methodology which earth observation scientists and researchers were familiar with.

Satellite Data in the Courts

Satellite images have been taken as circumstantial evidence in a few cases like that of the Srebrenica massacre, the Darfur atrocities in Sudan, and more recently Burma’s Rohingya crisis. Most of these were related to human right violations. However, in Chile, in 2015, the country’s water authority — the Direccion General del Agua (DGA) — launched an investigation into the illegal extraction of water for an avocado plantation.

As the area concerned was very large, DGA used satellite images as its main source of data to carry out the investigation and prepare a report based on it. The investigation is one of a kind and one which brought a state authority, law, earth observation, and journalism together.

The report was, and is still seen, as a big success in providing water justice to the local people. There are similar investigative reports now being developed on the deforestation in Rondônia in western Brazil, pollution levels in China and India, mapping atrocities in the Darfur region, development of refugee camps for Rohingya off the coast of Bangladesh (see image below), and perhaps most famously, the development of new islands by China (also below).

In the coming years, as the democratization of satellite technology gathers pace, more and more cases that had been undocumented or unreported will see the light of day. As this trend grows, the world could see the legal acceptance of satellite-based data as evidence in a court of law.

Changing Journalism of the Future

Journalism from the sky will bring unheard stories to the fore. In the coming years there will be amalgamation of journalism, satellite data, and storytelling.

This new genre of journalism will venture into uncharted territory, both in terms of physical and philosophical boundaries. Journalism from the sky will definitely bring something new to the existing scientific and statistical storytelling known among the earth observation community.

This article was originally published on Geospatial World. Here is the original post, which is republished here with permission.

Shivaprakash Yaragal is a geographical information system (GIS) researcher. He holds a Master of Technology degree from NIIT University in Rajasthan, India, and his specialties include climate change, disaster management, and sustainability.