A firefighter tackles a bushfire on the outskirts of the Venezuelan capital, Caracas. Image: Shutterstock

In March 2020, as much of the Western world began its quarantine due to COVID-19, Caracas was filled with smoke. Helena Carpio, a journalist specializing in the environment, leaned out of her window and was shocked to realize that the haze prevented her from seeing Ávila, the emblematic mountain that borders the Venezuelan capital.

There were no flames to be seen either. Something was burning, but no one knew where and there was no official news on what was happening. Twitter was the only place to track down information, and there she found messages from hundreds of people complaining about the consequences of smoke: chest pain, shortness of breath, itching and burning in the eyes, and other concerns.

“It was exasperating to look out the window and not see flames anywhere. It was widely known that something large was burning, but we had no idea what it was. Googling, I came across the Global Forest Watch map and started looking for what data was feeding that map. This is how “Naturaleza en Llamas” (Nature in Flames) arose,” Carpio told LatAm Journalism Review (LJR).

Using satellite data was the only way the team could get to the bottom of what was happening.

“Nature in Flames: 20 Years of Fires in Protected Areas of Venezuela” is an investigation by the Venezuelan digital magazine Prodavinci, which was led by Carpio. The project analyzed two decades of satellite data on hotspots to understand the when, where, and why of forest fires in all national parks, natural monuments, and other protected areas of Venezuela that correspond to natural spaces protected for their biodiversity.

Among the main findings of this investigation were that in 2020, Venezuela was the country in the Amazon region with the highest density of fires — almost double that of Brazil. In addition, in the last 20 years, hotspots increased in 63 of the 80 protected areas of this South American country, with 2020 being the worst year for fires on record. 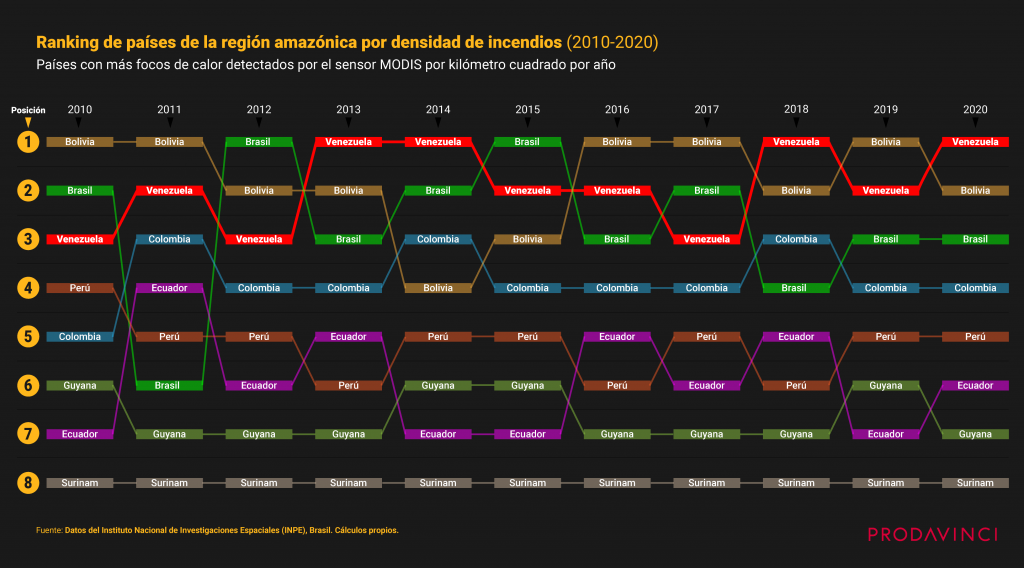 A ranking of Amazon countries based on the number of fires in each state, measured by area (in square kilometers) and based on MODIS satellite data. Image: Courtesy Prodavinci.

A Lack of Transparency

In Venezuela, there is no law on access to information and transparency, and for years, nongovernmental organizations and media outlets have denounced the existing opacity and lack of official information. Up-to-date data on the economy, health, and the environment is just not published.

There is also no public system that monitors fires in the country. According to Carpio, while there should be a record of when a fire occurs, it is not happening. The journalist explains that, previously, each protected area had a person responsible for monitoring fires. However, as the country’s resources dwindled, it stopped providing helicopters for monitoring and stopped investing in a prevention system, while those in charge of many areas left their posts due to volatile salaries.

The project analyzed two decades of satellite data on hotspots to understand the when, where, and why of forest fires in Venezuela.

Therefore, using satellite data was the only method the Prodavinci team came up with to understand what was happening.

The team went to NASA in the United States to request all available data detected by the VIIRS and MODIS sensors, which sit aboard NASA satellites and are part of the Fire Information for Resource Management System (FIRMS) program. Each request can only cover a period of one year, and is made through the FIRMS file download system.

The team got the data in CSV format — where each line of the file is a data record — because that way they could perform both statistical and geographic analyzes. Each piece of data had attributes such as latitude and longitude (which gave the geographical coordinates of the hotspot), date, time, satellite, instrument, confidence level, and whether the fire occurred in the day or night, among other indicators. Leaving only the relevant entries for the analysis, they assembled two databases that contained nearly 3 million hotspots: 975,897 from the MODIS data, and 2,733,695 from the VIIRS data.

An additional database of hotspots was requested from the Brazilian Institute for Space Research (BISR). BISR uses NASA’s Aqua spacecraft as a reference satellite. It carries the MODIS sensor on board and validates the hotspots with specialized algorithms. The team asked for all the data available for every country in South America. Another open data service — from Brazil’s BDQueimadas program — allowed them to download data from 13 countries for the period between 2002 and 2020 — in CSV format, which revealed 7.3 million hotspots across the continent.

Five other databases were also used to carry out the analysis: a geospatial database that allowed the protected areas to be separated by regions; another containing all the land units of Venezuela that are covered by vegetation; a third that mapped the physiographic regions of the country; another containing open data from the United Nations Office for the Coordination of Humanitarian Affairs (OCHA), which allowed them to locate each protected area within the correct political or administrative region of Venezuela; and lastly the land areas database published by the World Bank, which allowed them to calculate the density of hotspots for each country in the Amazon region.

“There is open software with great potential for investigative journalism, which allows us to explore databases like never before,” Carpio added. “At Prodavinci we learned to use geographic information systems just two years ago and, thanks to our close relationship with experts in different areas, we are discovering an immense range of journalistic applications, many that have never been considered. It is a strategic area for environmental research, especially for countries without access to public data.” 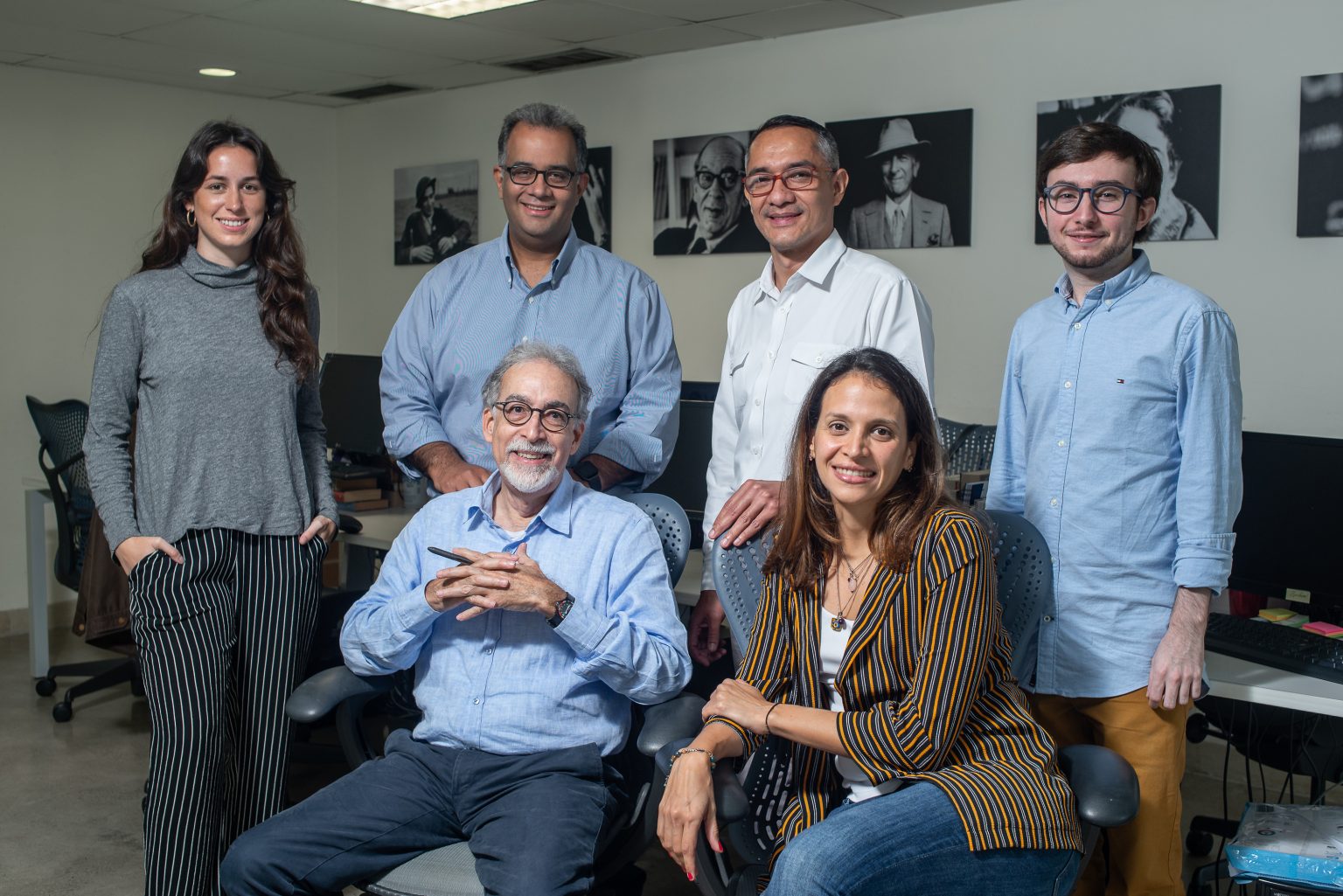 This is not the first data-driven project that Prodavinci has carried out.

“As journalists we are quite used to opacity in Venezuela,” Carpio said. “There is no data. So we are always looking for new ways of quantifying the issues even if they are complex.”

In 2018, the site published the investigation “Vivir sin agua” (Living Without Water) where the team managed to determine how many hours of water supply Venezuelans received in their homes each week, based on rationing plans published by the government. They transcribed the documents, cross-checked them with population information, and developed a methodology to standardize the parameters of the plans. This work won the 2019 Monsignor Pellín Prize and first place in the 2019 Instituto Prensa y Sociedad (Institute of Press and Society, or IPYS) National Contest of Investigative Journalism.

In 2019, Prodavinci published “Las horas oscuras” (The Dark Hours) which followed the same scheme as the previous project, but this time used OCR, or optical character recognition software [that can automatically analyze printed text and turn it into a form that a computer can process more easily]. They managed to calculate that 18.4 million Venezuelans lived in counties or parishes subjected to electricity rationing plans. This investigation was a finalist for the award for access to public information from the Office of the Special Rapporteur for Freedom of Expression of the Inter-American Commission on Human Rights.

Finding databases with information about Venezuela does not always happen. Most of the time, journalists have to build their own spreadsheets, and gather unofficial information. However, Carpio says that in her newsroom, the team is excited about the potential that the use of technology has within their investigations, especially in a context where transparency is lacking.

“Technology has changed our landscape. Perhaps, a few years ago, analyzing data with thousands of entries could have been very difficult, especially being a small media outlet with few resources. But, now using geographic information or OCR apps, you can do it in a week and you don’t need 30 people,” she said.

Synergies Between Journalists and Academics

“Nature in Flames” had support from two key sources: Venezuelan academics, which provided expert help and information, and the Amazon Rainforest Journalism Fund, an initiative of the Pulitzer Center for Journalism, which provided financial support.

Carpio pointed out that in the project, they transferred a methodology that is usually used in academia to journalism.

“Environmental issues are such complex issues… with so many details that I feel that the only responsible way to address them is by collaborating with academia,” Carpio explained during a video call. “This is work that perhaps could not have been done without the experts and the experts might not have been able to do it without the journalists. It was a team effort, from both sides and that is unprecedented in Venezuela.”

The synergy with Venezuelan academia was so significant that a scientific article will even be published as a result of the investigation. In addition, academic experts allowed journalists to see the full potential of the data and also its limitations.

For example, the satellite database they used meant they knew where the fires were occurring and when, but not the extent of the affected area or the reason for the outbreak.

“In the project, we were careful not to define total causality because we cannot determine the reason for the fires through satellite images,” Carpio stressed. “That is only determined by going to the field, studying the terrain, understanding the ultrasound, studying wind currents, etc. It is something more specialized. Our role as journalists does not go that far.”

From there, the team decided to focus the investigation on potential fire trends, patterns, and triggers, as well as common uses of fire by region.

Part of this synergy with academics is also a consequence of government opacity. Venezuelan journalists know that requesting data or information from institutions can be a long and cumbersome process, so they prefer to turn to experts or private industry, which usually have faster response times, Carpio said.

Prodavinci emerged in 2008 as a personal blog of the Venezuelan economist Ángel Alayón. Later, it evolved into what the same team defines as “a space for ideas, conversations, and debates.” The site currently receives an average of more than 1.5 million visits per month.

Prodavinci plans to continue carrying out projects using remote sensing and satellite data to address environmental and social issues. For now, as part of a second publication of the “Nature in Flames” project, it created “Where is there fire in Venezuela?,” a tool that displays active fires that have been detected and processed by NASA in near real-time.

The hotspots are automatically updated every 24 hours with public data available on NASA’s FIRMS page.

The map also shows all the national parks, natural monuments, and other protected areas in the country. According to the media outlet, it is a tool designed so that civil society, firefighters, park rangers, environmentalists, students, journalists, and scientists, can detect and monitor fires within the most important natural areas of Venezuela.

This article was written by Katherine Pennacchio and was originally published in the LatAm Journalism Review from the Knight Center for Journalism in the Americas at the University of Texas. This version has been edited for style and contains some additional information, which has been inserted with the permission of the author.

Climate Change: Investigating the Story of the Century 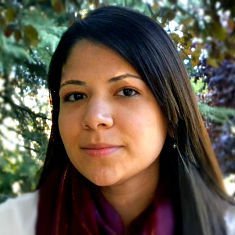 Katherine Pennacchio is a freelance Venezuelan journalist based in Spain. She co-founded Vendata.org, which campaigns for freedom of information and open data in Venezuela. She was part of investigative journalism site Armando.info, and of Runrun.es, where she worked on the Panama Papers. She is a member of Spain’s Association of Investigative Journalists.