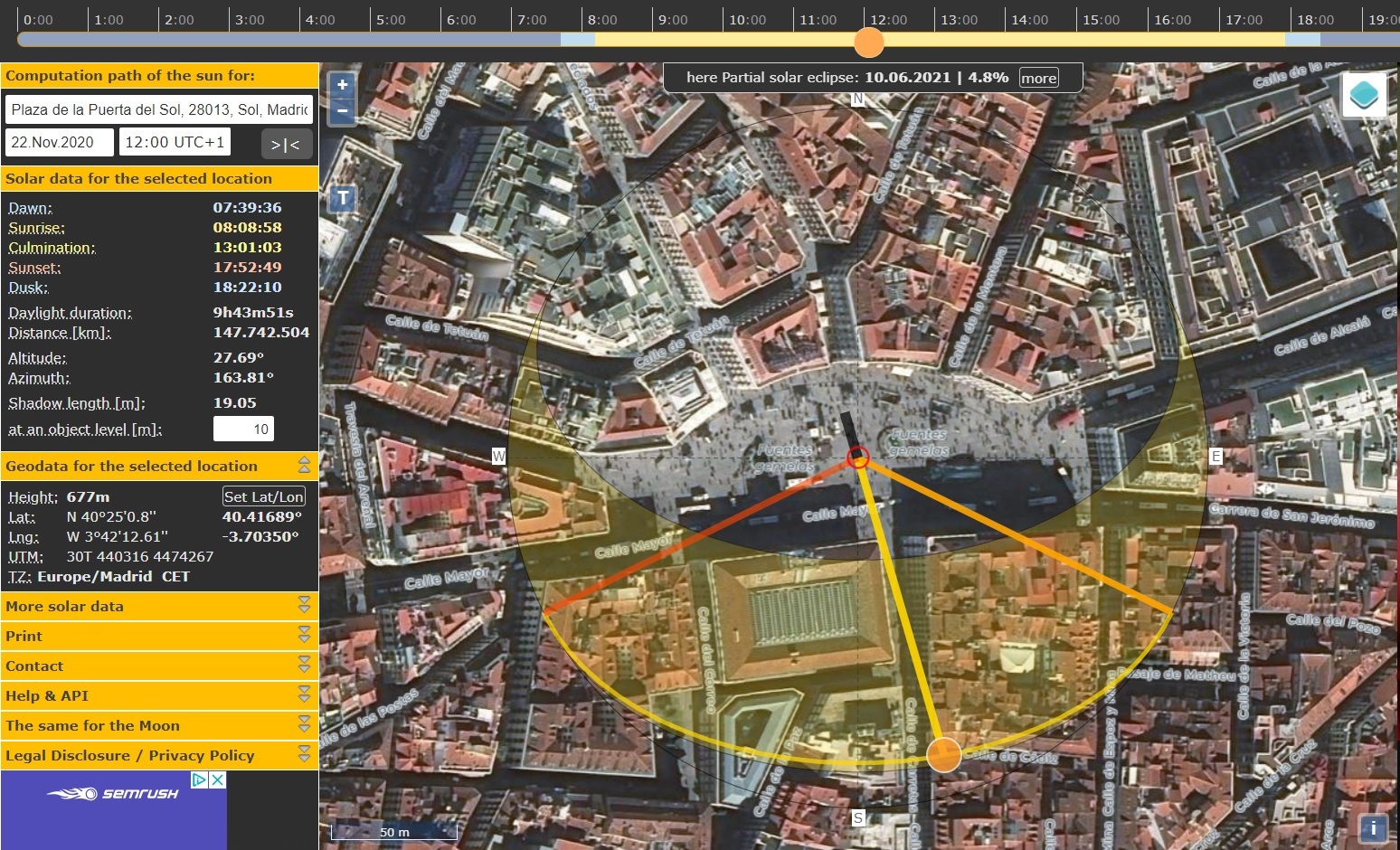 Most people who have been verifying photos and videos for some time will already be aware of a tool called SunCalc, which chronolocates a video or image. What is less well known is that the position of shadows and the sun can also be useful for geolocation.

For those not in the know, SunCalc lets users analyze the position of shadows and the sun at any given time and date, at any given location. By choosing a date and zooming in on a location such as, say, Puerta del Sol in Madrid, users can click the drag-the-sun icon at the top of the page to see the position of the sun at a certain time. The screenshot above from SunCalc shows the position of the sun over Puerta del Sol at noon on November 22, 2020. Furthermore, when users select the height of any object, the algorithm indicates the corresponding length of its shadow.

Chronolocation is an art in itself. This tutorial by Twitter user and OSINT expert @Sector035 offers some useful tips. In another example, Bellingcat’s Nick Waters recently used the technique in this investigation into the execution of two Armenian men in Nagorno-Karabakh by the Azerbaijani armed forces.

But there is another, often overlooked way to use SunCalc. The technique can be highly effective in narrowing down a search area, by excluding false positives and establishing in which direction the camera is pointed in a certain frame.

Let’s take a look at how to use it.

The following video was uploaded by an Instagram user on November 22, 2020.

It was uploaded as a story, meaning that it disappeared from this person’s profile after 24 hours. (Its author has given permission for Bellingcat to publish the footage for educational purposes.)

The video is timestamped and clearly displays the sun and shadows. This is the first hint. The second is that the user is a Portuguese speaker.

In other words, it was likely filmed in a Lusophone country — perhaps Brazil, perhaps Portugal, or perhaps a Portuguese-speaking country in Africa. Although the accompanying song (“Surra de Cama” by Xand Avião) is by a Brazilian singer, this video was actually filmed in Portugal.

How was this established?

The video’s timestamp indicates that the video was taken at 4:31 p.m. (UTC). Moreover, when opening a story on Instagram, the reader can discover when the story was uploaded (e.g., “25 min ago”). Both these timestamps corresponded with the actual time in Portugal, meaning that the video was also uploaded at around 4:31 p.m. (UTC). However, even without the timestamp the casual observer could see that the footage was shot in the late afternoon.

It is plausible to assume that the video was shot in Lisbon, as it is the biggest metropolitan area of Portugal. The sea is visible; this looks like it was either filmed in a medium-size city or bigger.

All this can be checked with SunCalc. In this case, by opening the page and selecting November 22, 2020 at 4:31 p.m. This link opens SunCalc with the exact same variables. 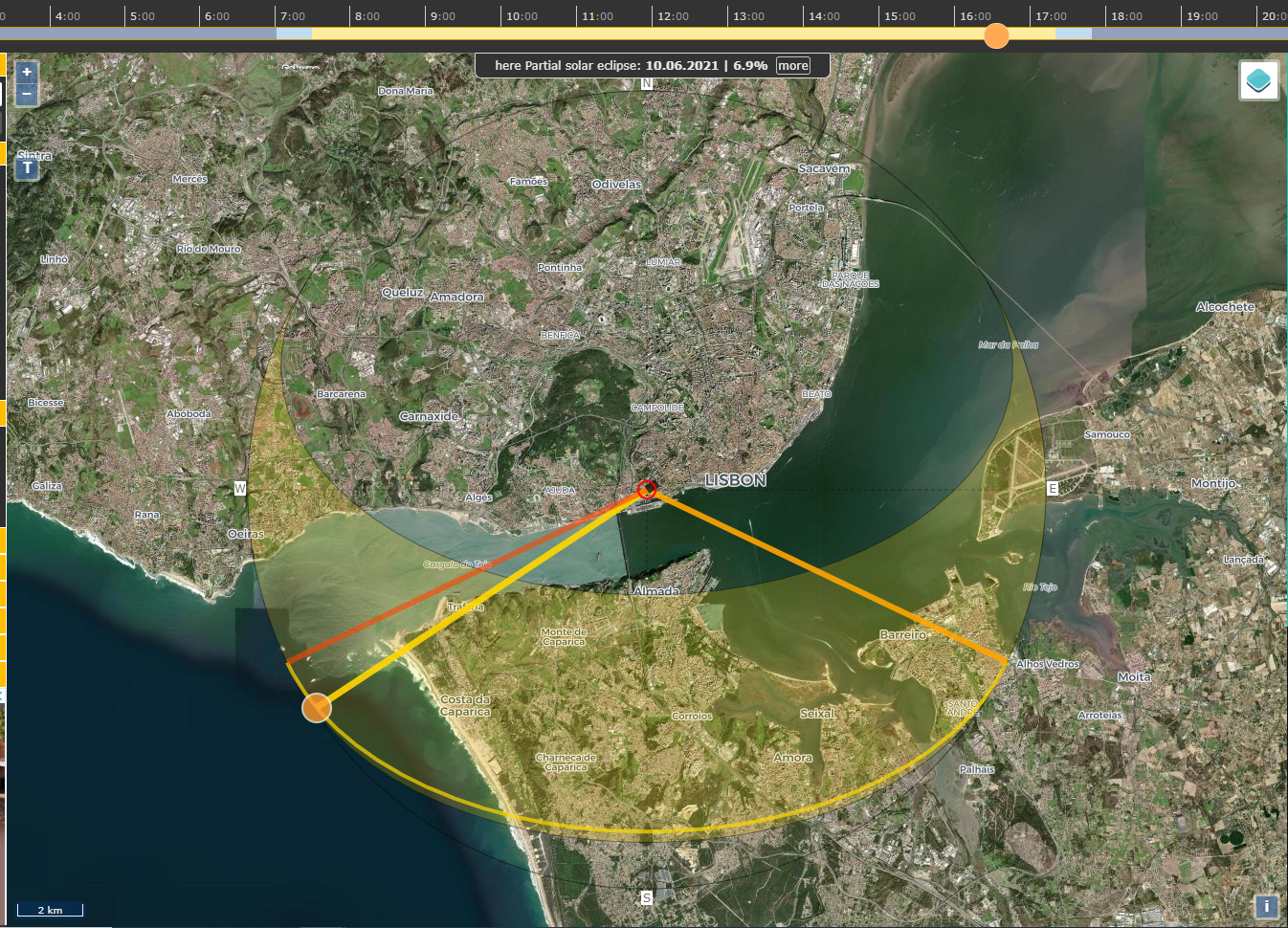 As the image above shows, the sun was about to set at that time and to the southwest of the city. In the video, the sun is above the sea to the right of the person filming. It is also clear that the footage was filmed from an apartment next to a four-lane avenue with a line of palm trees down the middle, a parking lot, and an elongated roundabout that appears to have been recently built:

So far, we know that the video was taken at 4:31 p.m. and that the sun was in a southwest direction at that time. For this reason, we can conclude that the person filming was facing south and that the avenue’s direction runs roughly east to west. We also know that the sea or the bay lies due south of the location. This allowed me to put together this rough sketch: 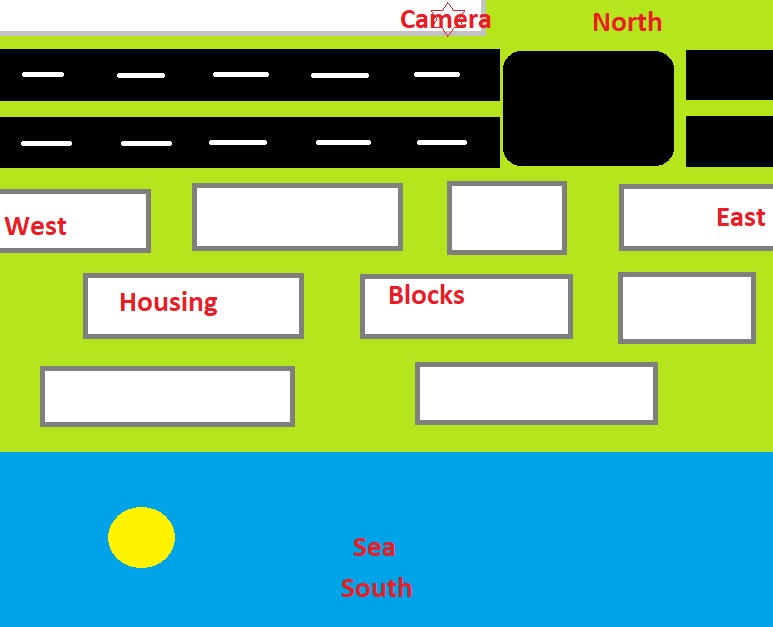 If the sea or other body of water must be to the south, that excludes several locations — not only further inland, but also any areas of Greater Lisbon which are south of the Tagus River. Furthermore, given that the avenue runs not only east to west but also parallel to the coastline, we can also exclude most places on the Tagus estuary which are northeast of Lisbon. 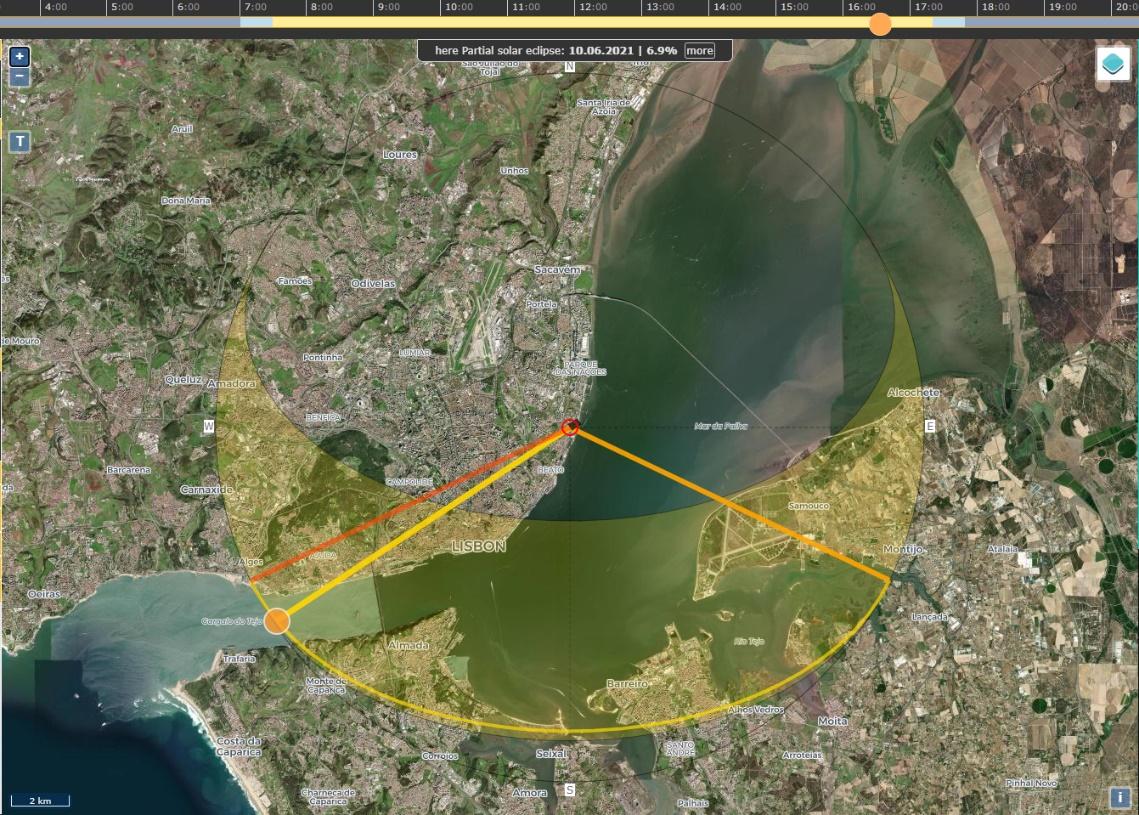 This narrows down the possible locations to places due west of central Lisbon, along the coast all the way towards Cascais. Importantly, the other side of the Tagus estuary cannot be seen in the footage. This suggests that the video was shot further to the west where the Tagus meets the ocean or along the Atlantic coast.

A search from east to west along the shoreline, looking for wide avenues divided by a line of palm trees near an elongated roundabout, yields only a handful of potential matches. If you are using Google Maps or Google Earth’s pre-selected satellite imagery you might miss the elongated roundabout altogether, but even then it is hard to miss the distinctive Avenida da República in Oeiras — with four lanes and a row of palm trees. There are no other streets like it in the immediate area. 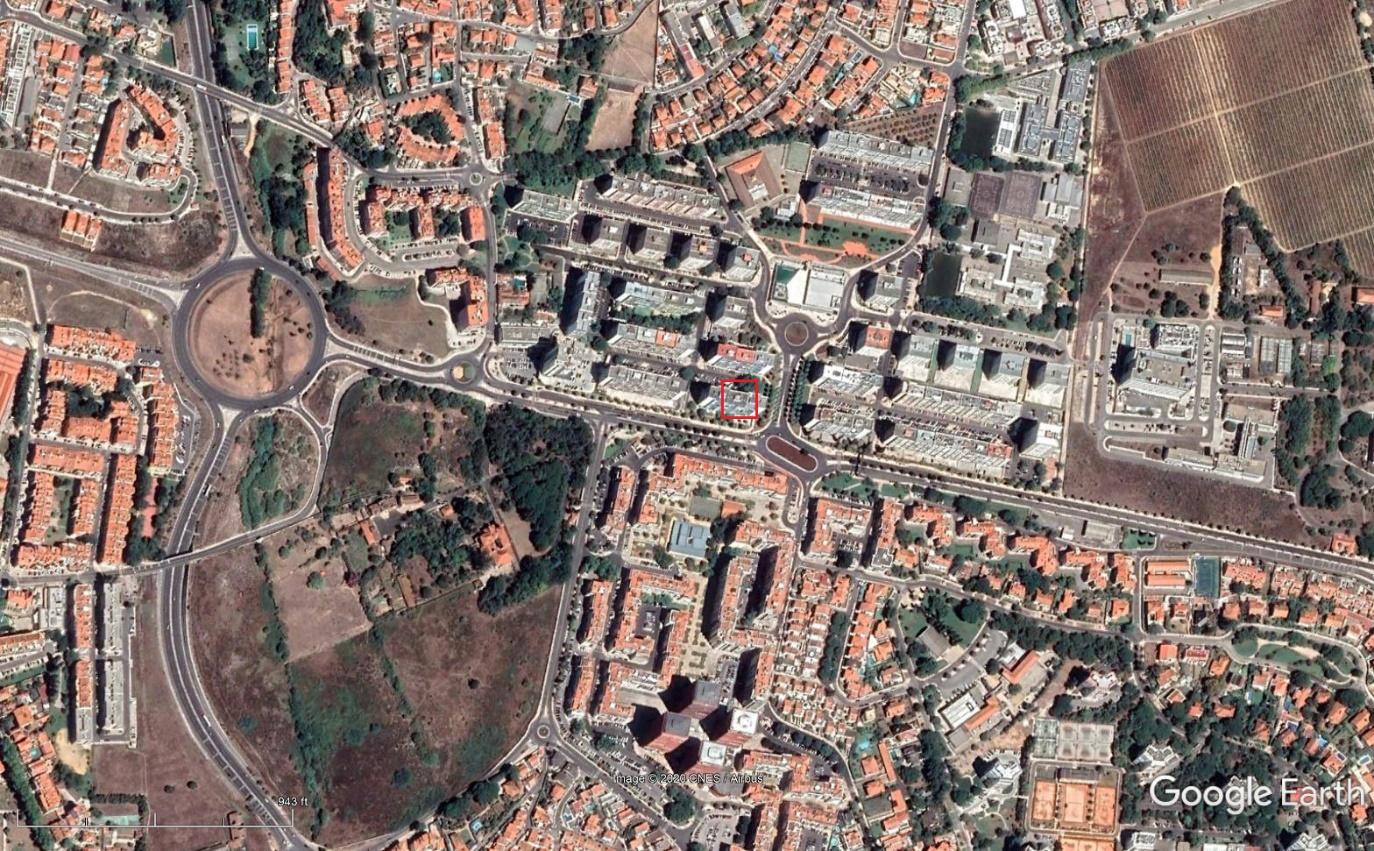 As mentioned earlier, this technique is often overlooked. Nevertheless, it is a fairly simple one that can save plenty of time once learned. It took me just five to ten minutes in total to find the location, starting only with a hunch that this footage might have been taken in Portugal — and more specifically, in Lisbon. Without a general orientation (i.e., where the cardinal directions are in relation to some landmarks, in this case the ocean), researchers can waste a lot of time checking false positives they could otherwise have excluded immediately — in this case, coastal areas south or northeast of Lisbon.

I hope this is a useful tip in your research. If anything, maybe this will make you think twice before posting a video or picture of that amazing view from your apartment window.

This story was originally published on Bellingcat and is republished here with permission.

Youri van der Weide is an open source researcher and trainer for Bellingcat. He has worked on a wide variety of topics including human rights abuses in Africa, migration in the Eastern Mediterranean, arms exports by EU countries, and research into new open source research tools and methods.