The ocean is vast and challenging to monitor. Exclusive Economic Zones (EEZs) alone total almost 137 million square kilometers (53 million square miles) of open water. Challenges in monitoring and enforcement often pave the way for illicit activities, such as smuggling, piracy, illegal fishing, and human trafficking. Crimes on the high seas are becoming increasingly sophisticated, endangering lives and undermining regional safety and economic growth, according to the United Nations Office on Drugs and Crime.

Tankers, and in fact all ships, are mandated by the International Maritime Organization (IMO) to use Automatic Identification Systems, or AIS, which provides information about the ship to other vessels and to coastal authorities. Rogue vessels often operate with their AIS — and any other tracking systems — switched off. When AIS is not able to supply enough knowledge, other data sources are critical for developing comprehensive maritime awareness. This is where satellite technology comes in.

The most popular form of satellite technology for tracking dark ships so far has been optical imagery. However, recent commercial innovations in synthetic aperture radar (SAR) sensors and new technologies like space-based radio frequency (RF) mapping have added new dimensions to maritime monitoring.

“Governments and maritime insurers rely on AIS as vital means for monitoring the oceans, but AIS has severe limitations. Ships engaged in illicit activities can deactivate their AIS beacons, vanishing off the map. Other problems include malfunctioning equipment or congestion interference that prevents receiving the vessel geolocation,” explained John Serafini, CEO of HawkEye 360, a smallsat company which has pioneered RF remote sensing.

Other alternatives for monitoring, such as patrolling with coast guard vessels or airplanes, are resource intensive.

Somewhere in middle of March 2020, HawkEye 360 started monitoring Iranian crude tankers that might be traveling to Syria. One such vessel, Romina, was last known to have returned to Iranian waters from a trip on February 23. Romina then remained completely dark until it appeared in the Gulf of Suez on March 17. HawkEye 360’s SEAker tool flagged suspicious AIS gaps in the vessel’s recorded travel. When the vessel exited the Suez into the Mediterranean on March 21, it again went dark. 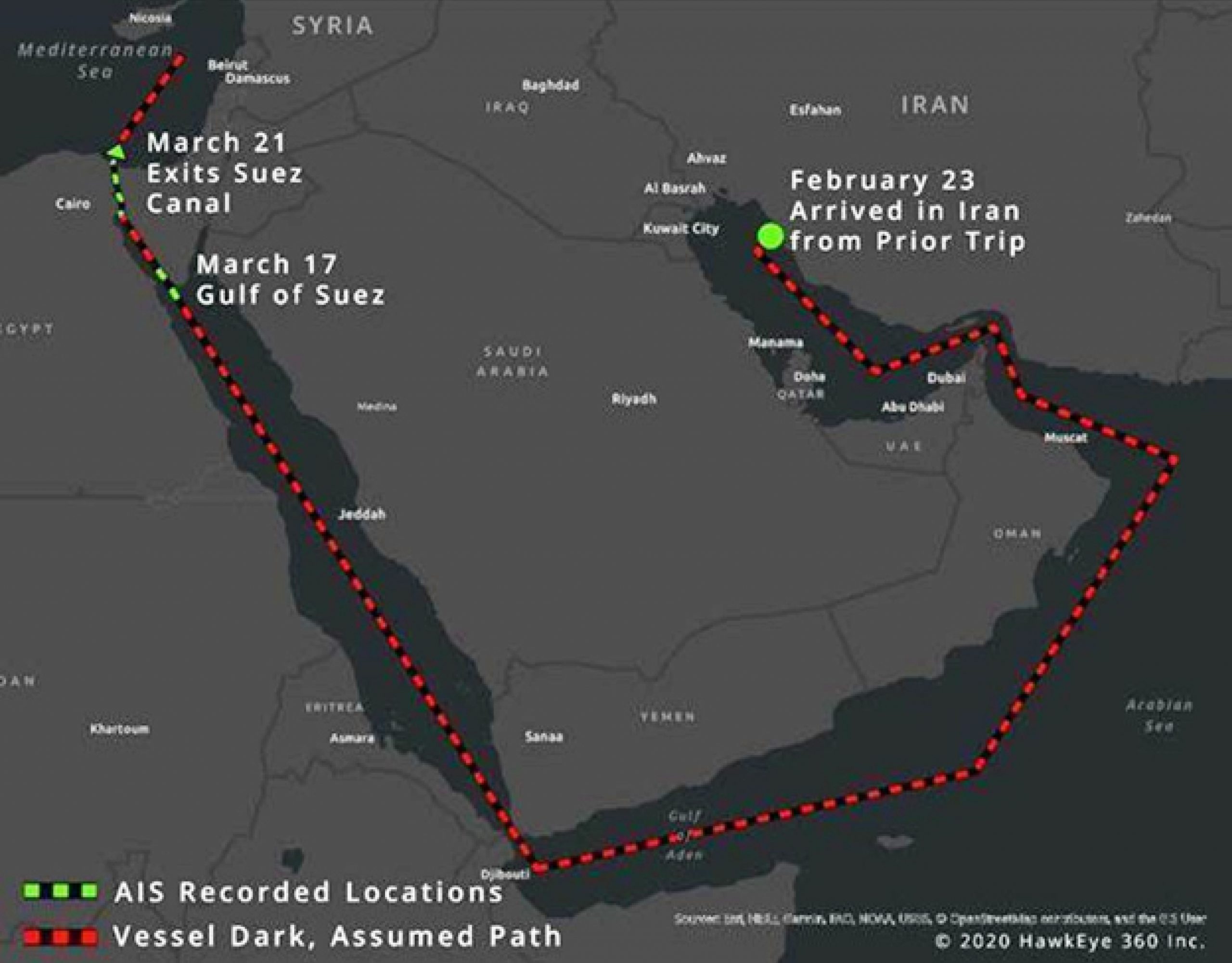 The above image shows the limited ability of AIS to track a vessel’s movement and how HawkEye 360 was able to flag suspicious AIS gaps in tanker Romina’s recorded travel. Courtesy: HawkEye 360

On the evening of March 25, HawkEye 360 geolocated VHF Channel 16 maritime signals at Syria’s Baniyas Refinery. VHF Channel 16 is the international hailing frequency to establish initial contact between two vessels or a vessel and land. For navigation and communication purposes, ships need to switch on their VHF signals from time to time. While AIS records showed no vessels in the vicinity at this time, the detected VHF signal potentially indicated newly arriving tankers that were coordinating the offloading of crude oil. But this required more information to validate.

On March 26, 2020, Tanker Trackers analyzed Planet’s 3-meter electro-optical satellite imagery of the sea near the Baniyas Refinery to find several vessels near the designated anchorage. It used its library of 3-meter imagery signatures for the Iranian crude-carrying fleet and associated assets to identify four Iranian-flagged vessels (Romina, Samah, Adrian Darya-1, and Tour-2). Although Adrian Darya-1 was already known to be at the port, the arrival of Romina and additional tankers to Syria’s Baniyas Refinery without AIS notification was consistent with the behavior anticipated from vessels attempting to evade sanctions.

This fusion of multiple commercial modalities — geolocated RF signals combined with satellite imagery analysis — produced an unclassified and shareable assessment that could be used by authorities for effective maritime monitoring. This also opens up future opportunities for identifying maritime activity of interest for further investigation, allowing enforcement organizations to deploy resources accordingly.

“The fusion of HawkEye 360’s data with Tanker Trackers’ imagery intelligence (IMINT) and open source intelligence (OSINT) resulted in a first-of-its-kind unclassified and shareable assessment of Iranian tanker activities,” said Serafini, whose company has been involved in filling maritime vessel information gaps even in the normal course of events when signaling is bad. 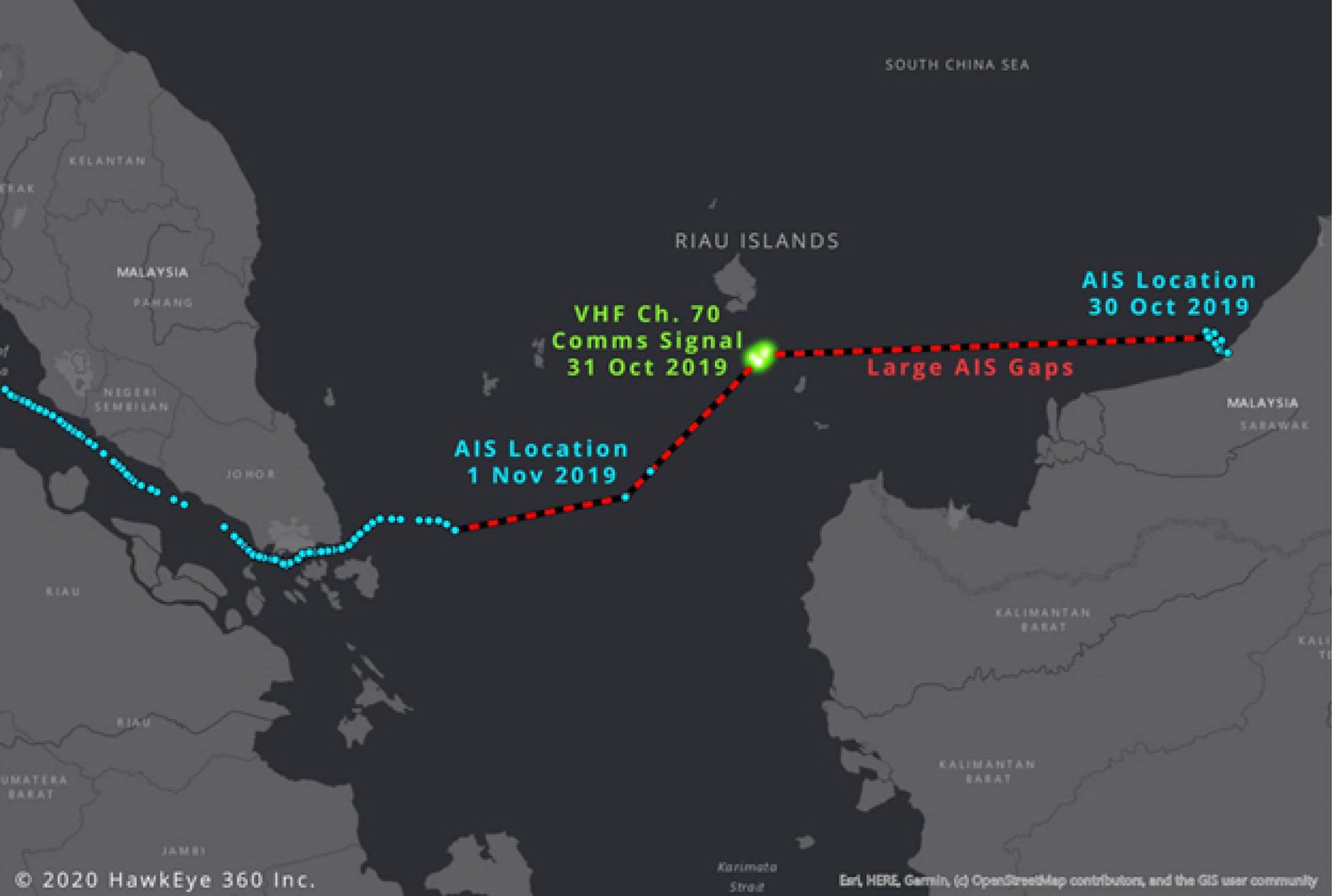 This vessel displays a poor AIS record, with many gaps, as it left port from Malaysia traveling west. HawkEye 360’s satellites identified VHF Channel 70 communications from the vessel near the Riau Islands. Courtesy: HawkEye 360 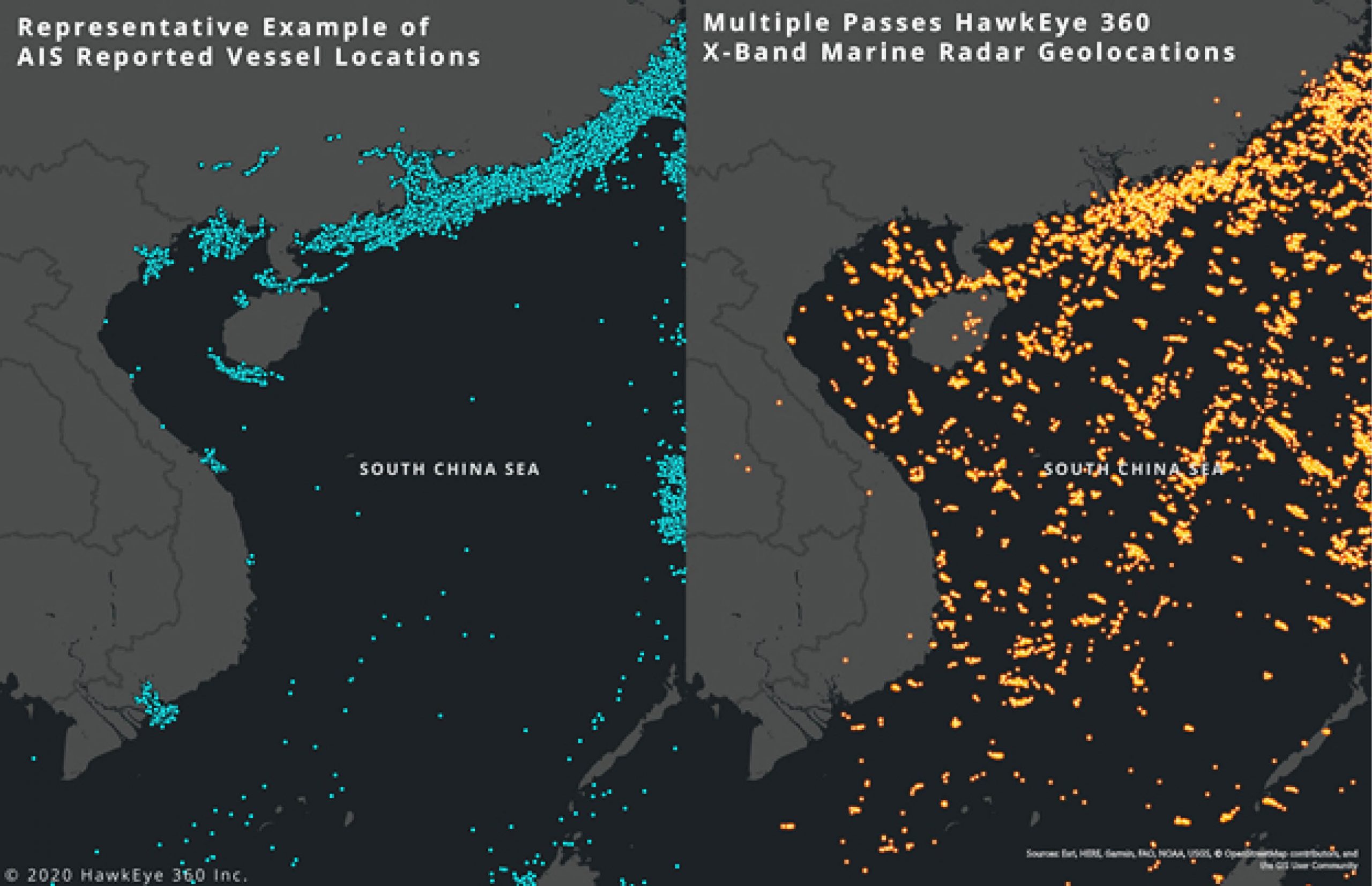 In March 2020, a report revealed an unprecedented number of vessels at North Korea’s main ports, in what could be interpreted as Pyongyang ordering its ships, which otherwise are engaged in illicitly ferrying cargo to China, back home in the aftermath of the COVID-19 outbreak. 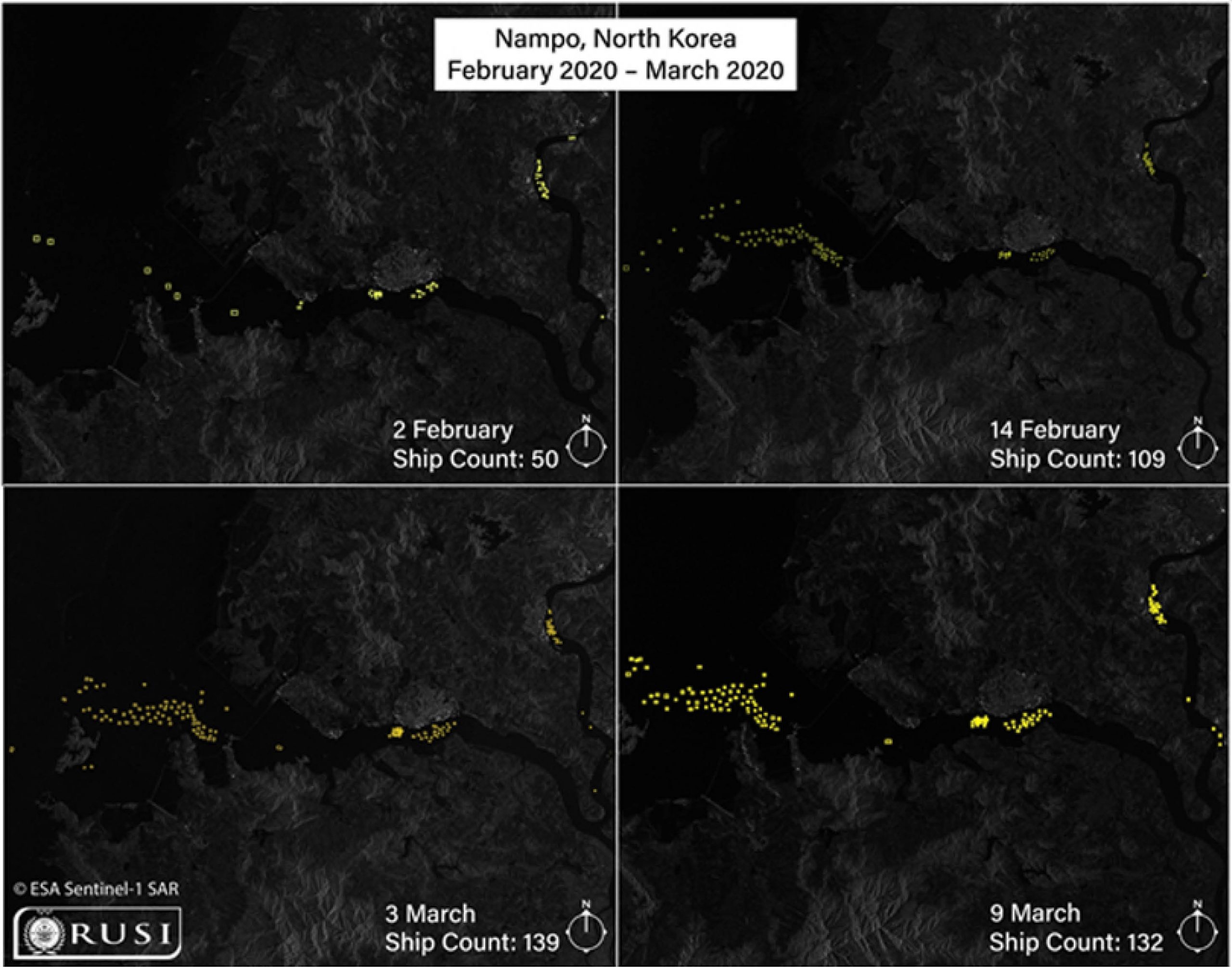 Project Sandstone, an initiative by the Royal United Services Institute (RUSI) — the world’s oldest and the UK’s leading defense and security think tank — used SAR (synthetic aperture radar) and optical satellite imagery analysis taken across February and March to show over a hundred motionless vessels anchored in the same areas. This is an unprecedented phenomenon in North Korea’s otherwise bustling port area of Nampo. Project Sandstone had earlier revealed that North Korean cargo ships were continuing to deliver coal to China in violation of United Nations Security Council resolutions. 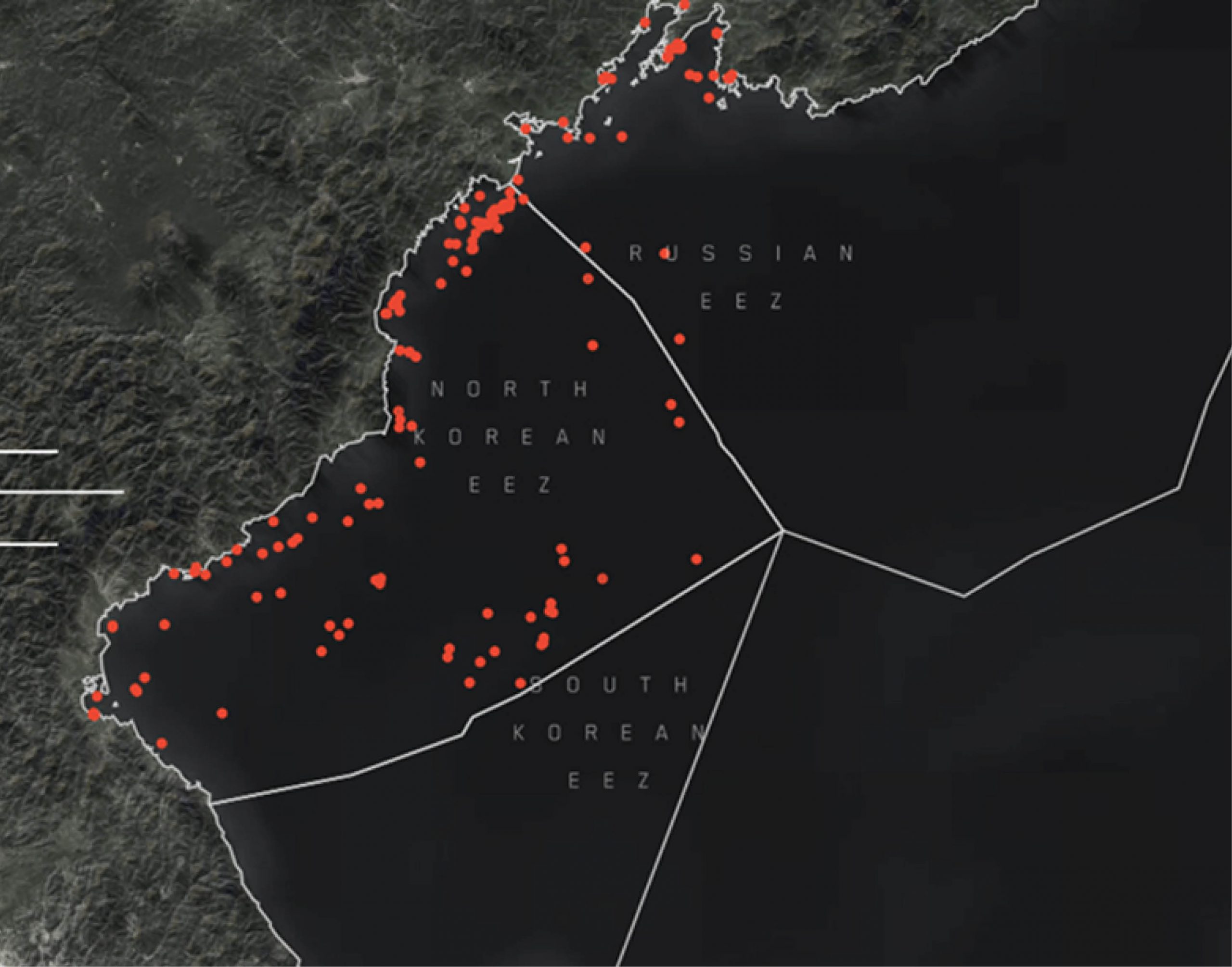 This earlier visual obtained with the help of SAR capabilities of Maxar shows just how many ships with their AIS turned off operate in the East Sea near North Korea. Courtesy: Maxar

SAR satellites use radio waves to image the Earth’s surface. Ships have a large radar cross section, making it easier for SAR sensors to detect them quickly, even when they turn off their AIS beacons. And because radar can penetrate through clouds and darkness, they can capture images on the Earth regardless of light or weather conditions. Analysts then use machine learning algorithms to combine AIS and radar data, and sometimes electro-optical or hyperspectral images, to gather information about ships.

For instance, ICEYE, a pioneer in small SAR satellite technology, partnered with Spire, the world’s largest Space-to-Cloud analytics company, in 2019 to track illegal fishing activities in the EEZ of Argentina. There have been incidents where the Argentine Coast Guard has had to take reactive actions against illegal vessels. Finland-based ICEYE claims to have the world’s largest radar satellite constellation with fastest coverage.

In the ICEYE-X2 SAR image above, there are Chinese squid fishing vessels that have their AIS tracking turned on, while other vessels have their AIS off. Courtesy: ICEYE

In another case, this time in the Middle East, ICEYE images showed a dark vessel moored near the United Arab Emirates port of Fujairah, where four commercial vessels were damaged in May following what was described as “sabotage attacks” by UAE authorities. While the vessel was officially classified as a tanker, high-resolution images from ICEYE’s SAR satellites showed two tankers in a ship-to-ship transfer formation — often an indicator of illegal trans-shipments, such as the unreported transfer of petroleum from one vessel to another — as well as a supportive tugboat to the side of one of the vessels.

This visual from ICEYE-Spire analysis show a dark vessel moored near the UAE Port of Fujairah. Courtesy: ICEYE

The region had seized global attention last year after two oil tankers were attacked when passing by the Strait of Hormuz — a key oil chokepoint. This immediately stoked tensions between the US and Iran, resulting in a 3% jump in oil prices.

“Our Dark Vessel Detection is built for governments around the world [to improve] the maritime safety of their regions, enabling authorities to take action based on reliable information. Data users can improve their enforcement activities against illegal trans-shipments of goods, help them in addressing illegal fishing, and assist in curbing drug and human trafficking,” said Steve Young, ICEYE’s vice president of business development and sales.

At the Core: Optical Imagery

What is making these new technologies more desirable is the magic that happens when this data is fused with optical images. As we saw with the analysis by HawkEye 360, it was only after overlaying the mapping of RF data on the electro-optical imagery by Planet that one could get an idea of the situation.

Similarly, another example from North Korea about its submarine activities demonstrates the use of SAR to augment electro-optical (EO) multispectral and panchromatic satellite imagery. In January 2020, 38 North, a US-based think tank on North Korean affairs, analyzed SAR imagery to reveal the presence of the North Korean experimental ballistic missile submarine and its submersible test stand barge positioned beneath a dockside awning, constructed barely four months back, designed to conceal and environmentally protect these vessels at its Sinpo Naval base.

The following two images (courtesy of Planet and 38 North) show strong layover effect in SAR imagery of a test stand at Sinpo:

International trade, sanctions, and regulations are complex and ever-changing, and in certain aspects include different requirements, thresholds for violations, and consequences of breach. For instance, as Samir Madani, co-founder of Tanker Trackers, pointed out:

“Iranian oil exports are not illegal. They would only be deemed so if they violated international resolutions such as UN sanctions, which is the case for North Korea, where there are strict quotas on what they are allowed to import and export. Both Iran and Venezuela are under unilateral US sanctions, and that means that international buyers of their oils are subject to the sanctions by [the] US.”

It is the buyers that risk being excluded from the US market, USD transfers, and IBAN (International Bank Account Number) banking system. Since the US government has informed maritime ports that they will face penalties if they are seen helping Iranian or Venezuelan oil transfers in any way, buyers may hesitate to be part of such deals.

The downside for these evolving technologies is that they are expensive and limited. It may take several days to access the data, and global coverage is not available on a daily basis. While these technologies have been available with most naval security agencies, it is only now that they are commercially available, making them lucrative for some businesses. For instance, commodity companies — oil and gas companies in particular — would be extremely interested, since they may want to make sure that links to their operations are not breaking sanctions, or ship-to-ship transfers are not happening on their vessels. Crude exporting countries have their fixed quota for transfers under the trade norms, and any violation can potentially cause volatility in international oil prices. Tracking the location of all commodities and the estimated time of their arrival at a particular destination allows traders to be dramatically more accurate in predicting daily prices in different parts of the world.

There may be some very legitimate reasons for an AIS signal to “go dark” — regions deemed unsafe due to piracy or genuine signal loss. However, as Gard, a top marine insurer, observed: “Going ‘dark’ in areas of heightened surveillance is a red flag to authorities, and legitimate reasons may need to be evidenced to dispel suspicion of intentional avoidance of sanctions compliance.”

How to Use Satellite Imagery in Your Next Investigation

When a Picture Tells the Story: 9 Investigations That Used Satellite Imagery

Using the Sun and Shadows for Geolocating Photos and Videos

This article was originally published on GW Prime, a subscription-based platform from Geospatial Media. It is republished here with permission.

Anusuya Datta is a writer, editor, and commentator who focuses on the intersection of technology innovations and its applications. She is the technology and innovation editor-at-large for Geospatial Media and Communications, where she previously worked as executive editor. She is based in Canada.